Okay I know I have not written anything for a while but this summer has not one I care to remember. Health issues have put a damper on a lot of my activities but everyday is better and thankful as it could have been a lot worse.

My bike riding and trail walking have been curtailed and for the first time in my life hot days have kept me inside but I have caught up on a lot of things I have been putting off.

Only have made two trips to the US and the second one almost did me in. The first was a trip to Ohio in April to my favourites spots. Spent 5 days chasing trains in Bellevue, Fostoria, Attica, Greenwich and Oak Harbor. 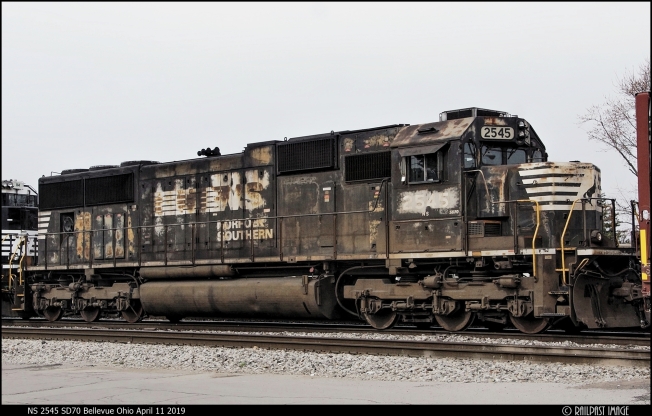 The second was in July to catch the Bog Boy Locomotive in Chicago and it was almost the last trip I made. My health was still an issue and being in the Sun or walking anywhere was impossible but it would be my only chance to see this monster.

Day started off fine at 5:30 am and headed to the border figuring I would be there in about 8 hours. One of the side effects of my medical treatments was I had to pee almost every hour so made for some anxious moments. I stopped in Durand Michigan for about 10 minutes to catch a train at the station then back on the road.

The miles clicked away and it seemed Chicago kept moving as I never seemed to get any closer. Ten hours went by and I was still about 50 miles from Chicago when traffic started getting slower and then almost came to a standstill. Took two hours to get across Chicago even on the thruways. Finally reached Blue Island which is on the west side of Chicago and did catch the first trains of the day. It was in the low 90’s with the humidity so only lasted about 30 minutes. Did catch 5 trains including Iowa Interstate which was pretty neat as only runs once a day in this area.

By this time I was wore out and checked the GPS for my motel and could not believe it was 40 miles away on the other side of Chicago. Ninety minutes later checked , had a shower and went to bed. Tomorrow was a big and a a close up meeting with the Big Boy locomotive. Up early and put the address of a road close to where is was on display and headed out as the motel was only 30 minutes from the UP Training Center.

After over an hour of driving I begin to think I was lost. Asked a telephone repair guy where the UP Center was and he kindly looked it up on his computer. It seems there were two streets with the same name and I had picked the Chicago one but the one I wanted was in a suburbs about 40 mile away. Another  90  minutes and finally arrived three  hours after I left the motel. By then there was no parking for miles around but after about 20 minutes waiting for somebody to leave I manged to squeeze in one. I knew I could not walk to far so had to find one fairly close in the Metra parking lot. Tried to walk over the bridge to get close but got too hot and had to go back and sit in the car with a/c until I cooled down. Then the monsoon rains came in waves and after getting soaked 3 times gave up and went back to the motel to take a nap. I did manage this shot from the Metra Station but was as close I was ever got. 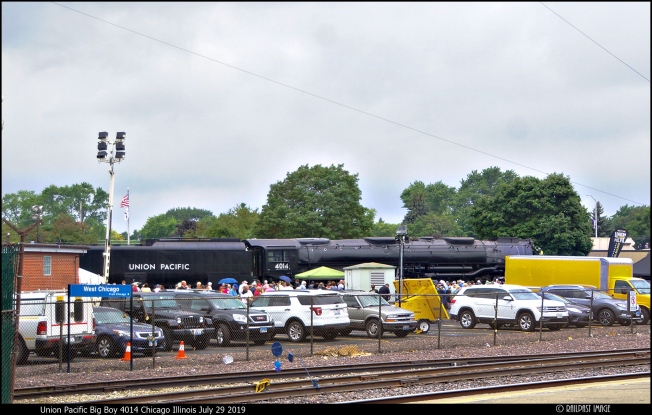 Next day up early again and headed west out of Chicago and had scouted out a spot that looked good on Google to catch it leaving. Figure on an hour to get there but traffic again was terrible and it was getting very close to when I figured it would be going by  Panic was starting to set in  as I parked my car. Again place was crawling with people but decided to wait as everywhere were lined up to see this once in a lifetime chance to catch this beauty in action. I asked if it had been by yet and was told I had lots of time. It then hit me I had not realized I was in a different time zone and was over an hour early. It finally showed up about two hours later after I got there but was worth the wait. At least Metra commuter trains were zooming by so something to see while we waited.  It would be coming out of the Sun but at least not raining. Some computer magic and ended up with this shot. 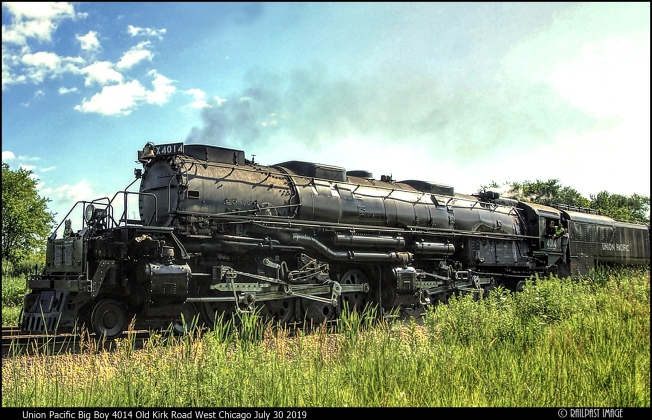 Chased it to Rochelle Illinois but again people everywhere so traffic was crazy. managed to get there but nowhere to park as place was crawling with people so headed west of the city. My Norfolk Southern engineer friend was going to be in the cab so could have got close up but it was impossible. I did catch him having the rid o f his lifetime in cab as it left Rochelle. He is the one in the white hat. In seconds it was gone but even with not feeling well, never getting near it and over 14 hours of driving it was worth it.  The video can be seen here https://youtu.be/xneTFD_w7M0 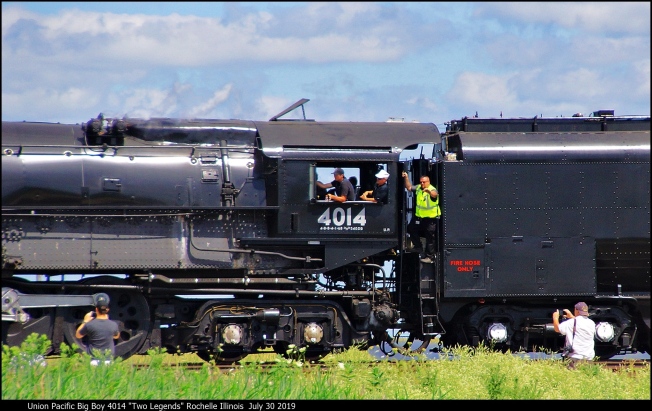 Next day headed east but ducked under Chicago and spent a quiet day and a half relaxing in Elkhart as no stress and good weather. Lots of trains, nice room and  time to recover. Next trip Sept 26 to Fostoria Ohio for their Train Festival but if feeling better may head they on the 15th to catch the NKP 765 steam locomotive.